Electric vehicles provide a nationwide battery resource which can store green energy and feed electricity back into the grid during times of peak demand.

EV owners could be rewarded for providing such a service to the grid.

Western Power Distribution (WPD) in partnership with CrowdCharge has been trialling how such a system could work through the Electric Nation Vehicle to Grid project.

At a time when the UK is facing a number of energy challenges, in areas including security of supply, increasing prices, and the need to achieve Net Zero, the Electric Nation V2G project has demonstrated that EV drivers can reduce their energy bills by using vehicle to grid (V2G) charging.

Electric Nation, an Innovation project of Western Power Distribution (WPD), in partnership with CrowdCharge, recruited 100 Nissan electric vehicle (EV) owners in the Midlands, South West England and South Wales to take part in the trial of V2G smart charging technology. The project is now complete and the findings are being published.

Funded through the Network Innovation Allowance (NIA), Electric Nation is different to other V2G projects because it partnered with more than one energy supplier and allowed many different import and export tariff types. This means that the trial was a more realistic simulation of a future world in which many streets will have a number of EVs using V2G chargers operated by different energy suppliers. 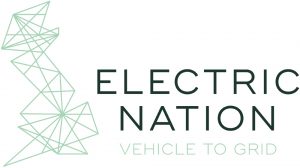 The project has proven that vehicle to grid charging works both from a technical point of view, and from the perspective of customer acceptance. It has also shown that EV owners can charge at off-peak times when energy is cheaper and greener, and by using V2G, they can sell this energy back into the grid, or use it in their home, to help minimise energy demand at peak times. This can help take the stress off the electricity grid and enable low-cost renewable energy to be used in the home when grid prices and the carbon content of electricity are high.

Participants who also had solar panels were able to charge their EVs with free 100% renewable energy. The trial allowed participants to transfer this green energy from the EV to the home at peak times, so further reducing demand on the grid.

Because, uniquely, the Electric Nation V2G trial had a number of electricity providers and tariffs, the project was able to show how tariffs influence charging behaviour.

Marie Hubbard took part in Electric Nation, using her Nissan e-NV200 campervan in the project. She comments: “As well as trialling the Electric Nation vehicle to grid charger, I have solar panels on the roof of my house, and an electricity tariff that allows me to import and export energy. So I set the vehicle to charge during the night when electricity prices are lower, and I exported energy from the vehicle to the grid during the peak times of higher demand.

“The result is that as well as reducing my electricity bill from £50 to £25 per month, I also made £25 per month by supplying energy to the grid. This shows that vehicle to grid charging has the potential to reduce people’s energy bills, as well as helping to reduce the amount of electricity generated by fossil fuels.”

Roger Hey, WPD’s Electricity System Manager, comments: “Vehicle to grid charging doubles the amount of flexibility in the electricity system, although in reality it brings even greater benefit because it also allows us to use the same unit of energy multiple times through charge/discharge cycles.

“V2G has enormous potential to reduce the amount of new electricity network that we build and can contribute towards optimising the whole energy system in Britain, ultimately needing less generating capacity and reserve.”

Mike Potter, CEO, CrowdCharge, adds: “The Electric Nation V2G project has shown that households can save money on energy bills by using vehicle to grid charging, especially if they have solar panels. However there is also an opportunity for commercial fleets to take advantage of this technology in order to help lower their carbon footprint and achieve their Net Zero goals.”

The Electric Nation project has proven that V2G works in a domestic setting, with households saving energy and therefore money, but there is also significant potential for commercial fleets to reap similar benefits, but on a larger scale.

Currently, only Nissan EVs can be used for V2G charging due to their CHAdeMO technology. The majority of EVs have the CCS charging system, which is due to be V2G-compatible by 2025; from that point V2G should be possible for all EVs. Action will be required from the energy supply industry to make V2G work for consumers.

The V2G trial follows the first Electric Nation project from 2016/19 which at the time was the world’s largest EV smart charging trial. The trial captured data from more than two million hours of car charging, providing real life insight into people’s habits when charging their vehicles.

The Electric Nation Vehicle to Grid end of project report will be available soon. For more information about the project visit and keep an eye on electricnation.org.uk

The Electric Nation Vehicle to Grid project, with the official WPD project name ‘Electric Nation: Powered Up’, recruited 100 electric vehicle drivers to trial state-of-the-art domestic Vehicle to Grid (V2G) Smart Charging in order to help Distribution Network Operators (DNOs) and others to understand how V2G charging could work with their electricity networks. This will allow DNOs to see what V2G looks like as a service, so it can be made available to everyone. EV drivers can help to balance variations in national energy production and consumption and can save money by buying energy when it is cheaper and greener. This project has effectively imitated the future.